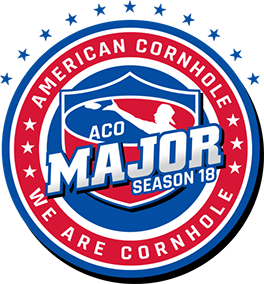 HOME OF COMPETITIVE CORNHOLE AND THE ACO PRO CORNHOLE TOUR

ACO Majors are usually 2-Day events and are the main points-earning tournaments each Season to qualify for the World Championships on the last weekend in July.

Other points-earning tournaments throughout the Season include ACO Regionals and ACO Conference Championships. See all ACO Events here.

A player’s (or team’s) three best finishes in any ACO Major of the current Season will count toward their World Ranking Points total. Once a player competes in their 4th Major, their lowest score will be dropped from the list, and so on.

All Divisions at each Major are points-earning except these walk-up Divisions: BYOP (Bring Your Own Player) Quads and Blind Draw Division.

Players/teams may participate in as many Majors as they like during the Season.

The Schedule is always subject to change. Start times of events may be delayed if prior tournaments run longer than scheduled. All times listed are local time.

Early Registration Online ends at 11:59pm EST, two Sundays prior to the event.

NO REFUNDS on tickets after Early Registration Deadline which will be two Sundays prior to the event.

ACO Membership is required for participation in any Division.
• ACO Social Membership (FREE) is allowed, but you will not be eligible to earn points or purses unless you obtain a paid ACO Membership prior to the start of the tournament.

To see Payouts and Prizes for each Major, visit the Major web page, the Registration page, or the Facebook page for each specific Major.

Tournaments are pool play with the top finishers from each pool advancing to the Championship bracket and/or Tiers. Games are Double Elimination.

Lots of tournament types are played at ACO Majors. Here’s how they work.