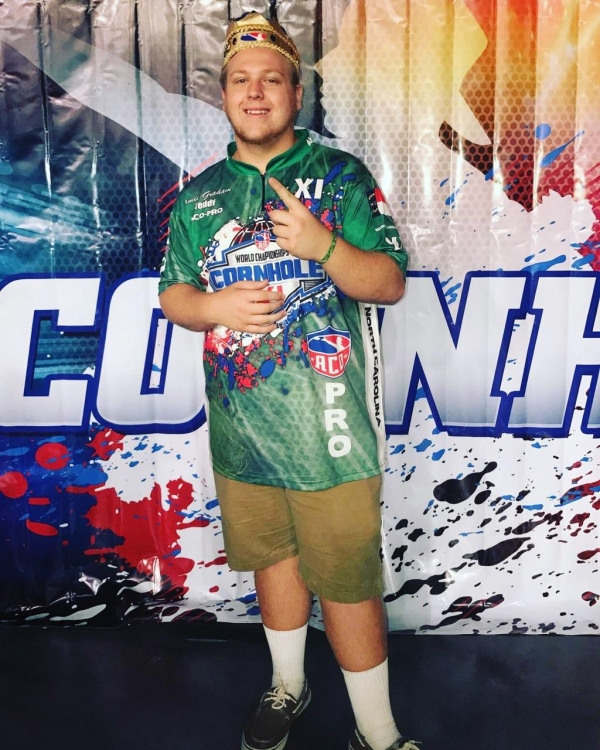 HAMLET — Very few people can say they have won a world championship; nonetheless, an accomplished 19-year-old Jamie Graham arrived back in his hometown of Hamlet Monday afternoon after claiming the World Championship of Cornhole this past weekend.

The championship tournament, hosted by the governing body of cornhole, the American Cornhole Organization (ACO), was played in Owensboro, KY from July 25-29.

At the age of 16, Jamie Graham played his first game of cornhole with his cousins at a family reunion. He immediately fell in love with the game and began playing on a regular basis. He began competing in the same year as he started and continued on to win his first tournament in Foley, AL at age 17, then on to win a major in Kenansville, NC.

At the age of 18, Jamie won another tournament in West Virginia, then another in his return to Kenansville. He went on to win the State Championship in June 2017, which led him to win the ACO World Championship of Cornhole this past weekend.

Jamie gave his brother, Steven Graham, a special thanks for being an inspiration to him as well as encouraging him to play cornhole. He said Steven was there for all his games.

Jamie also mentioned a supportive cornhole group called #BIG4 which consists of Trevor Brooks, Tyler Poythress, Jay Corley, and himself. He said, “They have been there from the beginning, and they are much more than just a group to me.”

He continued, “It feels good to win, and all the dedication finally paid off.”