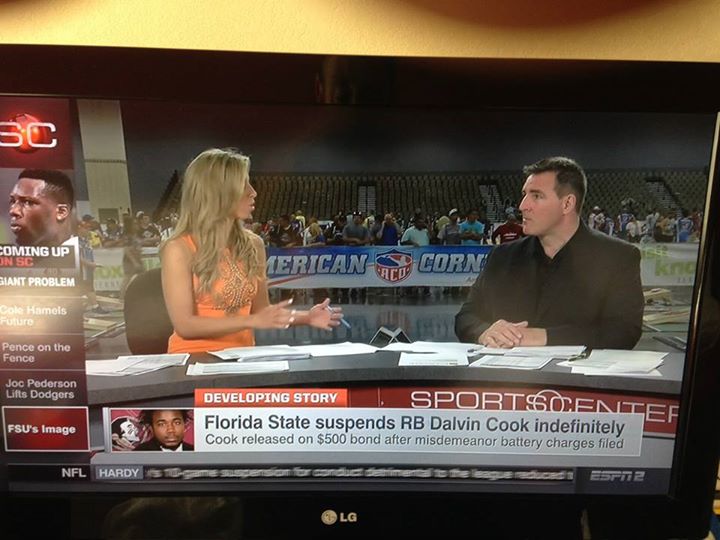 A few minutes before 9 a.m. Saturday, the thuds of bags landing on cornhole boards echoed through the lower-level exhibition hall of the Knoxville Convention Center.

Game time was just a few moments away, as participants little known outside their sport prepared for the final day of the World Championships of Cornhole X.

On the south end of the hall, people with names and faces much more familiar to sports fans around the country prepared for a broadcast of SportsCenter on ESPN2.

Anchors Matt Barrie and Sara Walsh were doing some last-minute prep work, while college football analyst and former Brigham Young and NFL player Trevor Matich prepared to be on the set. Louisiana Tech women’s basketball coach Tyler Summitt, the son of former Lady Vols coach Pat Summitt, meanwhile, waited patiently with his father, R.B. Summitt, and a friend to make a guest appearance.Showtime was just a few moments away.

Although tailgating fans at Tennessee football games have been known to play cornhole outside Neyland Stadium while watching ESPN, Saturday marked the first time the two sports have collided.

As part of the network’s “On The Road” series, which included a stop at the Nathan’s International Hot Dog Eating Contest in New York last weekend, the station did a three-hour broadcast from the Convention Center.

By all reports, Saturday’s show was a hit.

“This is easily the most unique thing I’ve ever been live from,” said EPSN anchor Barrie with a smile after the broadcast was finished at noon. “I was entertained for two straight days.”

ESPN coordinating producer Michael Epstein, who worked with the anchors and the crew on the ESPN bus outside the building, agreed.

“The people have been so great to us, and we just had an absolute blast being here,” he said.
The cornhole tournament officials, in turn, said they loved having ESPN on hand.

“It’s been absolutely amazing,” said Eric Hinerman, the director of certified officials for the organization overseeing the tournament. “It’s a huge step for us having SportsCenter come.”

Besides reporting on the sports headlines and doing features on the tournament, the ESPN anchors also interviewed various athletes with Tennessee connections, including former Vol and NFL punters Dustin and Britton Colquitt, and former Tennessee and NFL player Jabari Greer.

For Greer, appearing on ESPN is a fun opportunity for any player.

He also admitted to being impressed with the skills of the cornhole participants after watching them and doing a few tosses as part of the broadcast.

“I realize I’m not the best athlete in the building,” he said with a laugh.

Among those competing in the tournament, which ended Saturday night with the various world championships, was Shane Harrelson. Although he did not advance out of pool play, he said he loved being there and seeing all the attention the sport received.

“It’s been an experience,” said the Statesville, N.C., resident, who started playing the fast-growing sport with a friend who had some cornhole boards. “I’m glad to see the coverage of this sport is actually taking off now. There have been a lot of guys who have put a lot of time and effort into getting it where it is now.”

With so many Tennessee-related guests, the talk on the ESPN set was also about Tennessee football. Matich said off the air that through his observance of the job Vols coach Butch Jones is doing and through conversations with his nephew, UT student River Matich, he knows Vol fans are excited about the upcoming season.